For those who live outside of the UK, Waitrose is a large chain of supermarkets owned by the John Lewis partnership. This is a rather unique store, in as much as all the workers are considered to be partners; and I think all are shareholders. It claims to be an 'Employee Owned Business'.
It's also a reasonably upmarket store, where good quality is pretty well guaranteed (at a slight premium). 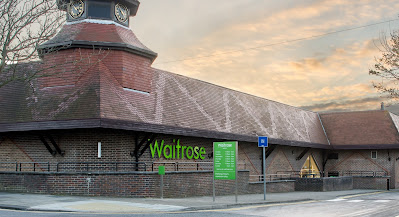 I needed a few things, so before heading off I looked online to check their opening hours. On doing so, I noticed that there was a second Waitrose store in Brighton & Hove, which was far more convenient than the city centre store, as I could go by car. I'd had absolutely no idea it was there.
The store in Hove (above) used to be a Co-op, which was very poor quality, so I was extremely pleased to discover that it has now become a Waitrose. It's much closer than the Sainsbury's I usually visit for my weekly shop, and it's a nice wide open airy store, with friendly staff, and a wonderful array of foods. I went quite early and found it to be reasonably quiet, which is important at the moment.
I probably sound like an advert, but I was very happy to discover this store. Eating well is a key part of life, and I won't tolerate rubbish. Waitrose may be a tad more expensive than Sainsbury's, but you get what you pay for, and the selection of foreign foods is remarkable. 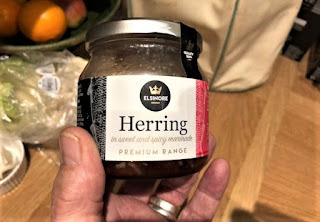 And to add to my delight; look what I found (above). It looks, and sounds, like Swedish 'Sill', which is difficult to find other than at Ikea. I haven't tasted it yet, but I'm certain it'll be as I expect.
I've been back in England since mid-October, and it's taken all that time to discover this store. It probably sounds ridiculous, but yesterday felt like my birthday!
Posted by Cro Magnon at 04:31