I don't OWN this clock; I'm simply a custodian.
When I was 'given' it, by my Aunt in London, I was told in no uncertain terms that it wasn't mine to do with as I please, but it would simply be in my possession before passing it on to the next generation; who would need to be told the same thing. A small Oak corner cupboard came with the same instructions.
And the reason for all this? Well, the clock was made for my family, and has been passed down ever since. I've only had it 'serviced' once, and was told that the mechanism is dated 1735. 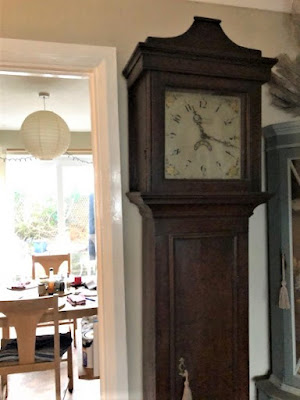 The dial is marked 'Debnam Newport'. This is one 'Charles Debnam' of Newport, Saffron Walden, which is near where my ancestors farmed. They owned a small amount of land including a part of Wicken Fen; which later became the first property owned by The National Trust.
It's not a fancy Longcase clock, in fact it's very simple and rustic. It doesn't keep very good time, as much as I try to correct it. I have to wind it every morning, and I often wonder how they regulated the time in the 'old days'. I suppose if someone came to the house with a pocket watch, it could be regulated, otherwise they would have lived by whatever inaccurate time it told. Maybe they set it to the village Church clock or bells.
I love sitting in the quiet of my sitting room with just the ticking of the clock for company. That tick has accompanied many generations of my family, and I hope it will continue for generations to come. I have turned off the chime, as it's not particularly pleasant. With a sprig of Holly and some tinsel on top it has a remarkably seasonal feel about it.
Longcase clocks are out of favour at the moment. A clock such as this can be bought for a mere £200 these days; some 40 years ago you could have added another zero.
Posted by Cro Magnon at 04:24