Where did all those railings go?

The absence of old railings is still very noticeable in the UK. 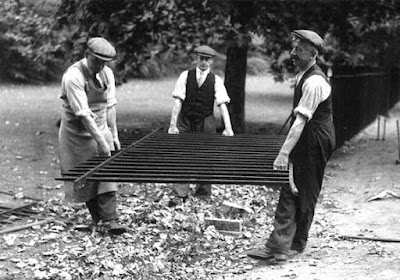 During WW2, there was a genuine shortage of Iron and Steel and the public was asked to donate their scrap, railings, gates, and other bits of metal to help the 'war effort'. The big question is; whatever happened to all that scrap metal?
Looking around me here in Brighton, signs are still everywhere of people's willingness to donate. In the  nearby churchyard, where I go every morning, signs are all around of missing railings (below). 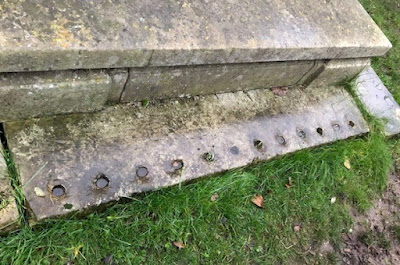 Bizarrely, most British Ironworks apparently reported no record of having received any deliveries of scrap.
Conspiracy theories, of course, were widespread, and most claimed that the public response was such that the government was over-run with scrap.
Some say that the stocks were so huge that they needed to be hidden away from public, out of embarrassment; others say that it was sent abroad in the form of 'ship's ballast', probably to West Africa where beautiful British railings can still be seen today outside modest housing. Another more extreme theory claims that most was dumped in The Thames Estuary or the open Sea; simply to get rid of excess stocks.
Whatever the truth of the matter, the scars are still there, and one can but wonder what towns might have looked like had people not replied with such eagerness to the demand for scrap. So much beautiful Victorian (and earlier) Cast and Wrought Iron was never replaced.
Posted by Cro Magnon at 04:29