I've always loved early architecture; Churches and Cathedrals in particular.
This is the church at the bottom of our road (complete with Seagull). The Church of St Nicholas of Myra was mentioned in The Doomsday Book, but the building's current form is mid 14th Century. The tower on the left contains a wonderful peal of ten bells that entertains us on most Sunday mornings.
The church is built of flint, with carved stone openings. It's an attractive building, and was the original Parish Church of old Brighton. 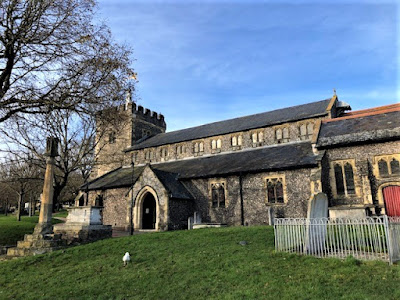 On the left of the photo you will see a 'column'. During the big storm of October 1987, many of the churchyard's big trees came down. One branch fell on the top of the column, and broke off bits of pinnacles, it's a miracle that it's still standing. I'm not sure what the column commemorates; it doesn't say. 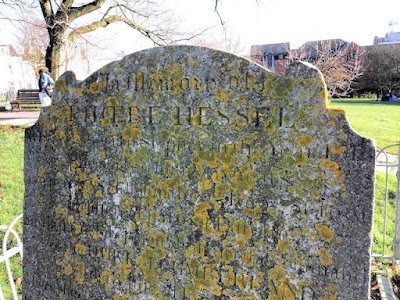 On the right, the gravestone surrounded by railings is that of Phoebe Hessel.  She was a remarkable woman who disguised herself as a man to follow the man she loved into the army. She managed to serve 17 years, and her gender was only discovered after having been wounded. She's worth looking-up on Google if you have a minute. 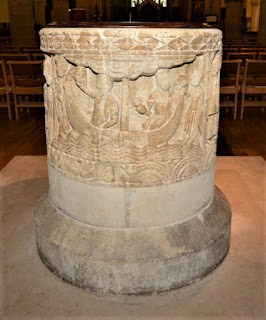 On the inside of the church there's a Norman font (above). It is reputed to date from around 1170, and is carved from a single block of French stone. Its origin is something of a mystery.
I'm not a religious person, but I do like having the church on my doorstep. Billy enjoys the use of the churchyard too!
I'm hoping to go to a midnight Carol Service there this year; if I can stay awake.
Posted by Cro Magnon at 04:33