George Bernard Shaw famously said "Britain and the US are two countries separated by a common language".
Another thing that separates us must be this Christmas card from Mr Thomas Massie, a US Republican Congressman from Kentucky. The idea of any British politician overtly demonstrating such a bizarre obsession is unimaginable.
Boris might possibly feature his dog Dilyn wearing a Santa hat, but his whole family toting assault rifles; never! 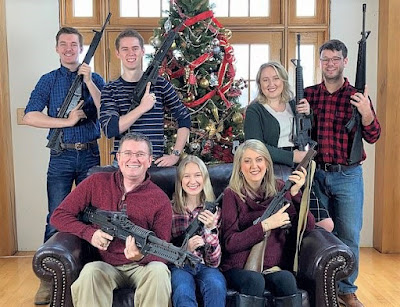 I'm not in the slightest bit religious, but isn't Christmas supposed to celebrate the birth of Christ? I wonder what HE would have thought of Mr Massie's Christmas card?
Posted by Cro Magnon at 04:22