The route towards our Booster Jabs has been filled with promises, rocky roads, and incompetence.

Everyone has been shouting at us to "GET BOOSTED". Boris has bawled it, the NHS has bellowed it, and even countless TV ad's with Chris Whitty have gently pleaded with us (above). Our problem was that we desperately wanted it, but those at the 'sharp end' didn't want us to have it.

Because we were both double-jabbed in France, they simply said "No" (non). What a bunch of idiots.

When we returned to Blighty in October, the authorities quite rightly demanded to see proof of our being double-jabbed. That proof was accepted without question by the government, and we travelled as planned. Since then, that same proof seems to have caused a problem for the NHS. Frankly we were getting extremely pissed off by their reluctance to vaccinate two vulnerable natives (with ALL the required paperwork).

So, having been 'pinged' on numerous occasions by the NHS, we decided to ignore the web sites, the 119 number, and our GP's and their non-existent help and promises, and try again. We discovered a newly established one day 'walk-in booster centre' in Hove. All we needed (they said) was proof of being double-jabbed, and our NHS number; absolutely no problem! The opening hours were clearly indicated, so off we went. 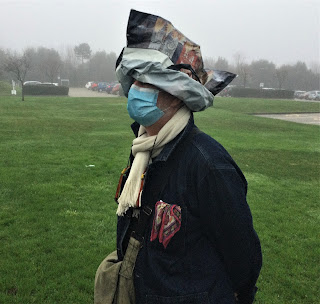 Amazingly, having queued for about an hour in the cold, fog, and drizzle (that's me with a plastic shopping bag on my head), I filled-in a form, got ushered into a small cubicle, and the job was done in minutes. All that previous bloody fuss for nothing. I am now 100% invincible. How easy was that NHS?

p.s. I read somewhere that Prof' Chris Whitty (in video) was at Windlesham House, the Sussex Prep' School where I used to teach. I wonder if I ever taught him? He looks about the right age, but I don't remember the name. Any failings in his Art or Latin skills may be my fault.