French cemeteries never seem to have much age. They contain plenty of graves and 'mausoleums' (sometimes inside a form of greenhouse), but they never seem to be much earlier than about 1800. I have no idea why that should be. 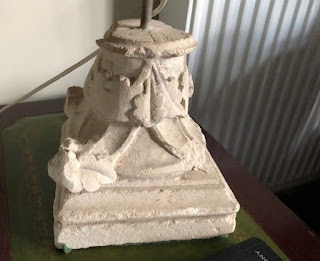 Most are surrounded by a high wall, over which private grave-tenders tend to throw anything unwanted. If you wish to spend an interesting half hour, walk around the outside of any country French graveyard wall; with a trowel.
I didn't make a practice of this, but on the few occasions I have, I've found everything from old bottles, glasses, urns, beaded garlands, crosses, photos of the deceased, etc; nothing was beyond the scope of the mourners as they tidied around the graves. Over the wall meant out of sight, out of mind.
My favourite discovery has to be this rather tatty Corinthian Capital. I think the sculptor must have become bored with his task as it's only half carved, and what is carved is very simplified.
Still, I took it home, cleaned it up, and turned it into a Lamp Base.
I does look vaguely like an archaeological find from ancient Greece, but in fact it's just a broken piece of French grave. Thank you; whoever abandoned it!
Posted by Cro Magnon at 04:22