I can remember clearly watching on TV as the Mary Rose was lifted from the sea bed in 1982.
She had been Henry VIII's gunship. Built in 1510, she survived many battles before being sunk in the Solent. There's not a huge amount of her left, but the basic bones of her hull, and part of the port side, are now for all to see in her home town of Portsmouth.
The Swedish ship The Vasa was built about a century later in 1627. She was a magnificent three masted galleon, and was the finest ship of her type ever to have been built. Her stern (below) was awash with carving, which was originally painted in polychrome. It is hardly believable, these days, to think of such attention to detail. She must have been a magnificent sight when launched. 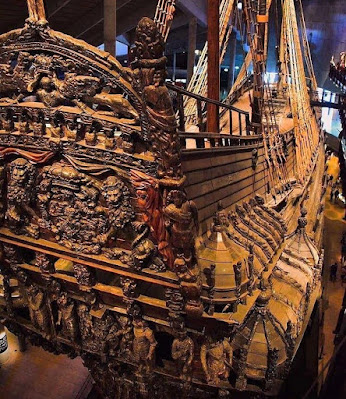 Sadly she sank after just one mile at sea on her maiden voyage, and managed to remain intact beneath the waves until 1961, when she was raised and carefully restored.
She had been poorly designed and was top-heavy, a sudden gust of wind had caught her sails, and she tipped to one side and sunk. She is on view in Stockholm, and as one of Sweden's major National Treasures, she attracts huge amounts of visitors.
98% of the ship now on view is original. The sinking, the raising, the preservation, and the ship itself, are all quite extraordinary. I haven't been to see her myself (I haven't even visited Sweden), but I recommend anyone going to Stockholm to visit. She must be an amazing sight; just looking at the above photo fills me with admiration.
The Mary Rose may be Britain's equivalent of The Vasa, but there is very little aesthetic similarity.
Posted by Cro Magnon at 04:36