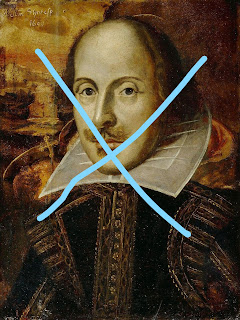 Just to keep you up to date with the UK's charming PC, Woke, Snowflake, Junior band of Dungaree-wearing 'Liberal', vegan, left-wing students (have I left anyone out?); they are now attacking the very core of English Literature.

1. There is much concern amongst the literati about the University of East Anglia's dep't of 'Literature and Creative Writing'. They have declared that ENGLISH is the 'Language of the Colonialiser', and they now insist that the University 'Decolonialises it's courses'..... Well, they would wouldn't they!

These charming 'pinkie' profs and undergrads are even questioning the study of Shakespeare, as, apparently, he represents 'White Cisgendered Privileged Male Authors', as well as other writers who represent the 'Privileged White Male Experience'.

I'm sorry if all this sounds like jumbled rubbish, but I am using their exact words.

2. On more Wokery; I've just been listening to some 'Linguistics Professor' who claims that it is insulting to imitate regional or class accents. He gave all sorts of 'liberal-Wokery' reasoning and examples, and even suggested that the characters in 'The Archers' all used stereotypical class/intelligence/occupational accents; and this (he insists) must stop. I suppose we'll have to have everyone in Ambridge all speaking with the same 'received' accents. He would have had Walter Gabriel saying "I say chaps, would you mind frightfully giving me a hand with my muck-spreading....".  Oh dear!

3. Not to be outdone, Leeds City Council are looking into the Yorkshire speciality 'Parkin' (a type of cake). It seems that they are very concerned by it being made with Ginger, Treacle, and Sugar, which are (of course) all products of British Colonial Expansion; and therefore EVIL. You really couldn't make it up!

4. And five trustees have recently quit the Vegan Society, because (yes, you've guessed it), it is 'institutionally racist'. It appears that 'Veganism' is 'cultural appropriation'. This British institution, founded by a British man, apparently uses foods and traditions from Africa and Asia. Personally I think the society should be closed down immediately; we cannot allow food racism, can we!

To quote that evil colonial-racist, Shakespeare, 'Cry God for Harry (the other one), England, and St George'..... Oh, and by the way, I shall be continuing to eat meat; which I suppose proves that I'm not institutionally racist, nor do I go in for cultural appropriation!