Barn conversions are very popular back in the UK, and are becoming more so here in France.
The only problem with their conversion (if indeed it is a problem), is that they don't usually have the features that one expects in old 'houses'. Barns don't have old stone windows, nor do they have old fireplaces, bread ovens, or other stone features. Here they will often have a large rounded, central, main door, but very few other features. Such things need to be installed, rather than restored.
Most old barns had no necessity for damp proofing either (even of a primitive nature), so unless the question is approached seriously, they can be permanently damp; some are almost a health hazard! Old houses here were mostly built over cellars, where some cool humidity was often welcomed for food preservation purposes. 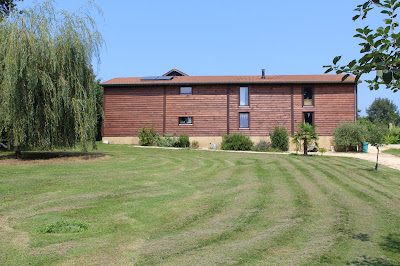 Our own barn (above) is of wooden construction, and luckily has very solid foundations, meaning no damp problems, and not having stone walls means it was very easy to insulate, and is always cosy in Winter.
Some of the most beautiful of the UK's country houses are converted barns. They are often perfect for making into large open-plan living space, with wonderful roof beams and interior woodwork. No restrictive interior walls to dictate what goes where; I've seen some stunning conversions.
This particular one (below) was regarded as being so perfect that it was taken to pieces in it's native England, and shipped to New York, where it was re-assembled and made into the fabulous house you now see. I can see why they went to such trouble! 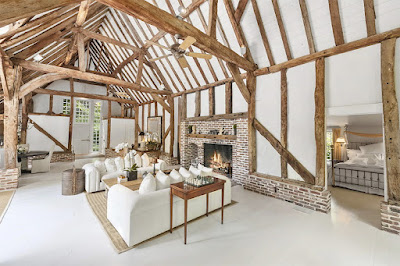