Taken for a Mug!

After I was first diagnosed with having Type 2 Diabetes, I would always take my small 3-monthly prescription to a Pharmacy that was very near to my doctor's surgery. They were reasonably efficient, but certainly lacked bedside (pharmacy-side) manner. They were often very offhand, and unfriendly; not only with me, but with everyone. 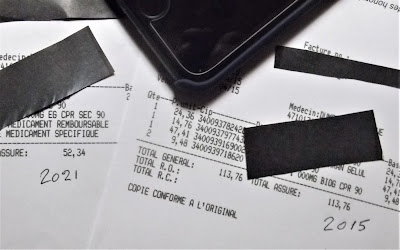 Now, since we have a brand new Pharmacy nearer to home, I have changed my allegiance, and am more than happy to have done so.
Recently I noticed that my current prescription, which involves about twice the amount of pills than back in 2015, costs about half the price. €52.34 now; as compared with €113.76 back in 2015.
Maybe pharmaceuticals prices have dropped drastically over the past 7 years.... but somehow I doubt it. I think my previous Pharmacy simply doubled the price, and hoped I wouldn't notice! I had no knowledge of the price of pills, and as I didn't hold a French health card (Carte Vitale) they could charge me whatever they wanted, without any Insurance Co asking questions.
Last night we discussed what, if anything, I should do about it. If they were overcharging me, then they were certainly overcharging others, and they should be stopped.
We eventually decided that, as in so many circumstances, it would be better to do nothing. People have a way in France of never taking responsibility for their own actions, and turn the blame on the innocent.
Frankly I don't care any more, I shall simply have to accept the fact that I was being grossly overcharged for years, and keep on smiling.
p.s. I would like to add that when at my new Pharmacy to get my recent prescription, the 'boss' was being very attentive to an elderly lady who was also collecting her medication. He sat down with her for some while, helped her to her feet when she left, and made sure that everything was OK. It was the perfect demonstration of kindness, which one would never have seen at the old Pharmacy; he's an extremely nice man. We (of course) all waited patiently until he had made sure she was safe, and on her way.
Posted by Cro Magnon at 04:22