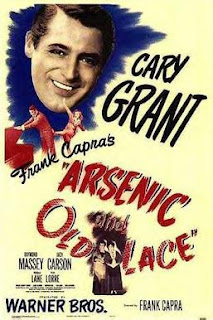 I've had a few 'mute' parts in films, and was once offered a small speaking part in 'The Countess from Hong Kong' (which, sadly, I was unable to accept), but I've only acted on stage once, and that (as I suspect with most people) was at school.

The show's producer (JM) was one year senior to me. When he first asked me to take part; I categorically refused. He continued to pester me, and eventually I said 'OK', as long as it was a very small part, and required little acting talent.

The play in question was Joseph Kesselring's 'Arsenic and Old Lace'. JM gave me the part of Mortimer Brewster; my lines consisted of about half the whole bloody play.

I learned my lines in a week or so, other than one section where I was on the phone, speaking amidst others speaking. I put my script by the phone and read my lines direct. It was impossible for me to learn when to come in amongst all the other characters who, I seem to remember, were all shouting simultaneously.

I have to admit that I enjoyed my brief acting career (2 shows). I presume that JM chose me for the leading role because of my similarity to Cary Grant, who played the part in the Frank Capra's 1944 film version. Hmmmm, maybe not!

JM went on to be a producer on Broadway, but I never received another call.