Japan, The Olympics, and Sue Perkins. 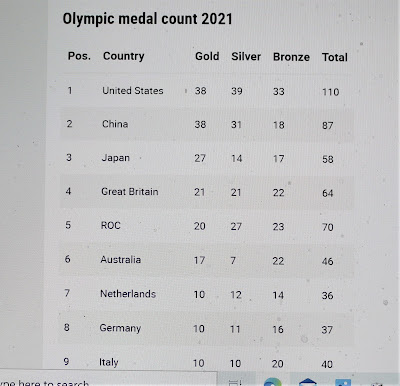 The jumps have been jumped, the races run, and the dives dived. It's all over, the equipment stored away, and the athletes back in their native countries to great acclaim.

I'm not a huge fan of the Olympic Games, but I do enjoy watching 'excellence' of any sort. For example, on Saturday afternoon, as it poured, we watched some of the Gymnastics involving hoops and balls (I don't know what it's called), and it was spellbinding. I was seriously impressed.

There seemed to be less 'well known' athletes around this time. We Brits all know Tom Daley (the diver), but not many of the others. In many ways they are a species apart; well known in their own circles, but not so much elsewhere.

I was pleased to see that little GB came 4th in the medals table; I think we even have one more gold than shown above. GB was the highest placed amongst the European countries, which no doubt will infuriate Macron, von der Leyen, and Merkel. Expect some sporting retribution.

People outside of the UK may not know of Sue Perkins, but she is a comedienne and TV presenter. One of the most interesting spin-offs from the games was a tour of Tokyo by Ms Perkins, where she delved into the general life of the city. She (of course) visited clothes shops, and was amazed to see that women's shops all seemed to sell what looked like children's clothes. The fashion being for young women to look like schoolgirls...... Interesting!

There seemed to be only one day of serious rain, plenty of days of heat-n-humidity, no real disasters, and a very well run show. Well done Japan, and well done to everyone who took part; whether they gained medals or not.