I like cats. I've lived with cats since I was very small. At my native home in Surrey (below), we were hardly ever without a cat; but always just one at a time. I think I understand cats. 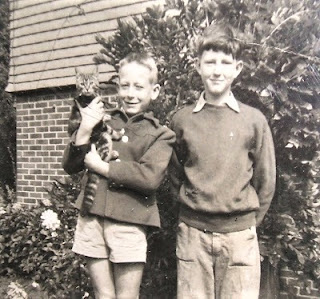 We only ever had two types; black or tabbies. The black ones were invariably called Blackie, and the Tabbies were always Tiddles. This one above in the arms of my French friend Didier, was no doubt a 'Tiddles'. This idea of sticking with the same names probably came from my aunt who lived down the road. She had a series of Highland Terriers (?) who were all called Rover. 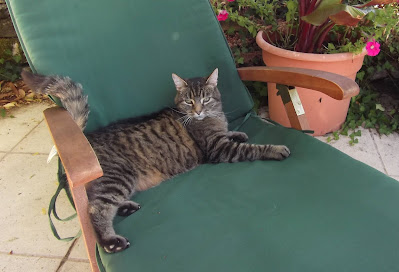 We don't have a cat at present. Freddie (above) was our last one, who we lost at the end of 2018, and here he is, relaxing by the pool.
Like all cats he was an enigma. He was often very annoying, but also had a very friendly side to him. I would often awake in the night to find him curled-up sleeping under my chin. He often brought live mice into the bedroom, and at night would often demand to be let indoors from the roof's sky light.
As I hope you can see by the photo, he was a very beautiful boy, and like all cats had that wonderful look of arrogance and distain. He really did think we were his inferiors.
Shakespeare wrote 'I have studied many philosophers, and many cats. The wisdom of cats is infinitely superior'.
Posted by Cro Magnon at 04:27