A question of fish. 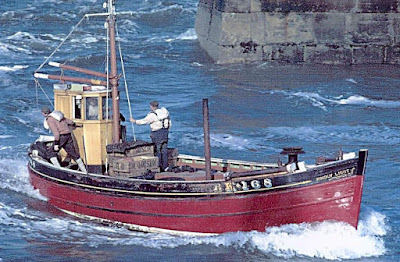 English fishing ports such as Fleetwood, Hull, and Grimsby, used to be wealthy towns that supported not only the fishermen themselves, but countless others who catered to the town's fish-based wealth; jewellers, hotels, builders, wine merchants, etc. These days they are almost ghost towns.

English cooler waters supply 90% of the EU's fish, but England itself was restricted to fishing just 14% of that supply. Brussels still considered this too much, so back in Brussels they came up with a cunning plan.

To stop the English from fishing their own fish, they decided to pay UK boat owners to destroy their boats (such as the one above); they had to be totally destroyed so as never to sail again. Either burned or cut-up for scrap, leaving the waters dangerously open to EU boats.

Now, of course, as she is no longer a member of the EU, the UK wishes to fish her own waters again, and sell the catch to the EU as 'English Fish'.

M Barnier isn't pleased. He thinks that even though the UK is no longer under the thumb of Brussels, he still wants Europe's trawlers to take whatever they wish from UK waters. He has even offered 15% of the value of fish caught by EU trawlers in compensation, amounting to around £90 Million per annum.

No doubt some deal will eventually be struck, and then overlooked. There's no question that both French and Spanish trawlers will continue to take as much fish from UK waters as they wish. They will do as they've always done; make the laws, then openly flout them.

What a very different organisation it's become. The UK joined a 'Common Market' on Jan 1st 1973, and left the 'United States of Europe' on Jan 1st 2020.