In the early 60's, when I was still at school, Elvis Presley, Buddy Holly, and Gene Vincent, were amongst our musical heros. The four piece electric guitar groups had replaced the 'old fashioned' big bands, and music had become more intimate and personal. 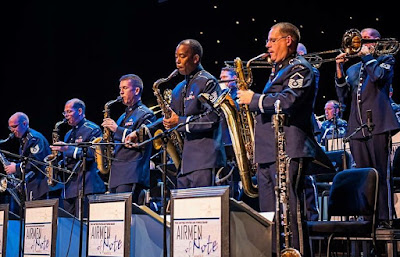 One day an order was issued that we were to attend a musical performance by a nearby US Air Force band (from Mildenhall?); frankly none of us really wished to go, we imagined Sousa marches and military rallying tunes; but our presence was obligatory.

I remember the performance well. There must have been about 30-35 musicians, all in uniform, sitting behind their music stands. The conductor walked onto the stage to a rather feeble, unenthusiastic, applause.

Then from the very first few seconds of the first number, the full power of a 'big band' had us transfixed. The amazing sound of the massive brass section filled the hall, and we were suddenly all in awe. It was not only great music, but also great theatre. I think it was the first live concert of its type that I'd attended.

By the end of the hour long concert, everyone was enthralled, and I remember that the final applause lasted for ages. We all talked of little else for days.

I imagine there are still a few big bands around, but most young people would have to be paid to go see them. It's a shame, as they don't know what they're missing.