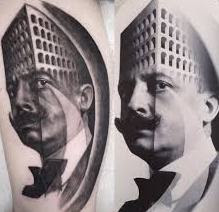 Both Lady Magnon and I are big lovers of Pasta. We eat pasta at least twice a week.

Back in 1930, the Italian poet Filippo Tommaso Marinetti (above) launched his famous 'futurist' campaign against the eating of pasta, calling it an 'obsolete' food; heavy, brutalising, and gross. Silly man.

As you could imagine, his pronouncements didn't go down too well wherever pasta was served; i.e. throughout Italy, and elsewhere!

Marinetti suggested his own 'futurist' alternatives to the daily consumption of pasta. He suggested Mortadella with nougat, Pineapple with Sardines, Salami soaked in coffee, flavoured with Eau de Cologne; all of which were to be eaten to the accompaniment of different perfumes, whilst stroking some suitable material such as silk, velvet, or emery paper.

Marinetti claimed that pasta wasn't a food for 'fighters'; he said that it made them placid and slow, whereas meat eaters were quick and aggressive.

Filippo didn't limit his 'futurist' ideas to pasta, he also demanded that all foreign influences in Italy be banned, and proposed that a bar should be known as quistibeve (here one drinks), a cocktail as a polibibita (multi-drink), and an aphrodisiac as a guerro in letto (war-in-the-bed).

Other campaigns against the eating of pasta have failed equally as dismally as Marinetti's, and along with the humble potato and rice; pasta has become a staple of world diet.

Personally I only eat a few varieties of pasta. Spaghetti (my favourite) and Penne with various sauces, and Vermicelli in lunchtime soups.

Life for me would be extremely dull without pasta; and damn Marinetti!