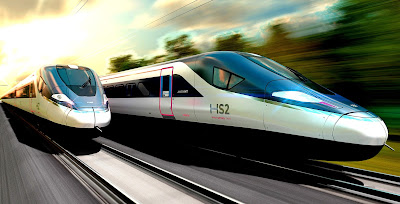 It might sound like a simple solution to have rescheduled all meetings in London or Birmingham by 20 minutes (and for Leeds or Manchester a tiny bit longer), but to genuinely integrate 'The Northern Powerhouse' with the UK's business hub (which is London) the country does need the best road/rail communications possible. The North/South divide has existed for too long.

There are people out there who think that spending this £100 Billion is money down the drain (Originally I wasn't keen on the whole project), but we need to think of it as the old Socialist war cry of  'redistribution of wealth'. The money doesn't just disappear; it becomes liberally spread around. From the simple pickaxe and shovel wielding navvy, to the most sophisticated technicians, all will be taking home their fat pay packets over the next ten years or more. Steel works will remain open, ready-mix providers will be assured their employment, and even the police will earn 'overtime' dealing with tree-hugging protestors.

I have often stated that my least-liked human quality is hypocrisy, but just watch as those who have been demonstrating against the government's policy of austerity, now begin to demonstrate against their excessiveness. Where once they demanded more spending, they are now moaning about the high cost of new infrastructure and communications.

OK, many of us were unhappy about HS2, but let's now get it done. Employ all those extra workers, enhance the economy of the Midlands/North, and make the travel time between London and the North just that teeny bit quicker.

p.s. While we're on the subject of spending large amounts of public money; when comparing the cost of HS2, to that of Gordon Brown's outrageous NHS privatisations (£300 Billion), I suppose it seems like quite a bargain.