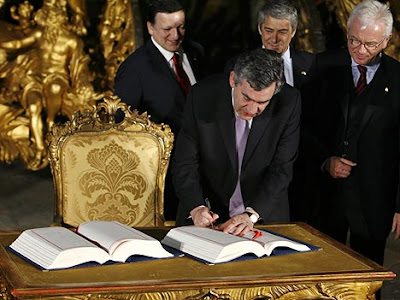 Looking back 9 years, I don't think much has changed in Brussels; other than the UK's exit!

As Gordon (son of the manse) Brown signed away England's sovereignty to the EU, others were openly laughing behind his back. Yes, they really were. They'd just pinned a sign on him saying 'MUG'!

I really don't know if England's membership of the EU was advantageous or not, if it was it was at a very high price; however, certain facts are inescapable.

OK, the UK is a wealthy country, and Luxembourg is a tin-pot state filled with multi-millionaires. But what the hell is going on here? I fail to understand why each and every UK citizen should be out-of-pocket by €937, whilst each super rich resident of Luxembourg benefits to the tune of €16,170 (maybe that's WHY they're so effing rich).

You may wonder why I've chosen to compare the UK to Luxembourg. Well, according to the IMF Luxembourg is the second richest country in the world (after Qatar), by GDP per capita.... Don't you, like me, get the impression that something's gone seriously wrong in all this?

Or could it simply be because Jean-Claude Juncker was Prime Minister of Luxembourg from 1995 to 2013; and maybe had some influence?

And people still wonder why the UK voted to leave.