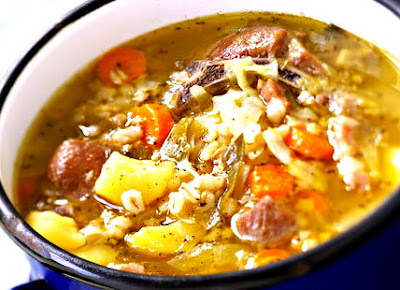 In various ways I was fortunate to have been born just after the end of WWII. It was an age of austerity, and appreciation; it taught us a lot. Even in families such as my own, who were reasonably affluent, we still grew as many of our own vegetables as we could, had our own hens bantams ducks and geese, and grew plenty of fruit.

We were still in the days of rationing, and I think we appreciated every small luxury that came our way.

We ate steamed puddings, plenty of dumplings in stews, and soups that were heavily enriched with lentils or split peas. Whatever was cheap and available would bulk-up our meals, and keep our stomachs happy.

One of the dishes that I particularly liked was my mother's version of Irish Stew. It was made with the cheapest cuts of Lamb, usually 'scrag end of neck', potatoes, carrots, and plenty of pearl barley. The above photo is not of my own, but exactly the same.

It was the pearl barley that I really liked, and I still use it in Irish Stews today. It's an old-fashioned ingredient, and probably unheard of by millenials. In fact I doubt if many supermarkets even stock it.

p.s. Which reminds me. I was buying ingredients for Lady M's Christmas Cake recently, and on her list was a jar of dark Molasses (Mélasse Noire). I couldn't find it anywhere, so eventually had to ask a 'shelf-stacker' who I found in the area where I would have expected to find it. She shrugged her shoulders, and declared "Never heard of it". I'll have to return to the Bio shop where I bought it before.