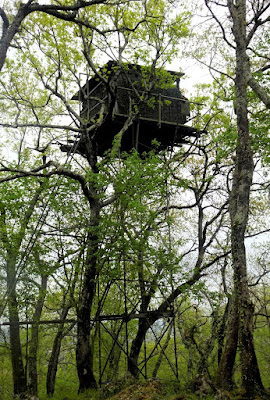 In times past, at this season, all red-blooded Frenchmen who owned a shotgun would have been found atop tall trees, in their Palombieres (above), awaiting the passage of these Wood Pigeons.

This annual practice now seems to have all but ended.

Yesterday morning I witnessed a sight that would have made many a French chasseur weep. On my early morning dog walk, I witnessed tens (maybe hundreds) of thousands of Palombes passing overhead on their way towards the South West. Some were in huge groups of thousands, others were simply dozens; all were heading in the same direction, at the same speed, and at the same height. It was a scene the size of which I'd never before witnessed; the passage lasted for about an hour. Hunters would have been in heaven.

Most of them passed directly overhead, and I was quite expecting to be splattered with excrement; luckily none came my way.

We always see a certain amount of birds in groups flying off for winter, but I've never seen as many as yesterday. It was quite spectacular.

I did hear a few very distant shots. Some of my chasseur friends used to speak of shooting hundreds every day. I believe they were preserved by being put into the freezer whole, including their feathers. Later they would only eat the breasts, which I considered rather a waste.