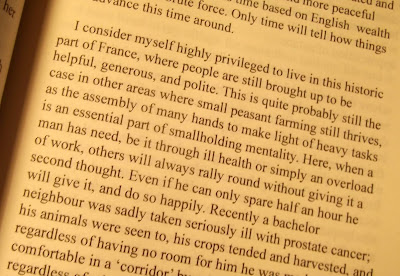 I was recently thumbing through certain pages of my 2008 book 'Je t'adore 24', when I was particularly taken by my description of the generosity and helpfulness of my neighbours, when I'd arrived here in 1972.

Life was very different back in the 70's. Hay bales were smaller and more manageable and we all helped to fill the barns before nightfall, small vineyards were everywhere and needed plenty of helpers at harvest time, and neighbours combined efforts to complete all sorts of tasks.

Today those bales are huge and heavy, and are left outside, the vineyards have long gone, and all those tasks that needed many hands are either done by machine, or not at all.

Most of my neighbours now concentrate on four main crops; Hay, Maize, Sunflowers, and Chestnuts. Some may keep a few cows, hardly anyone keeps Pigs Chicken or Ducks, and much of their land lies idle. A lot of the work is now done by contractors, and share-cropping is common amongst those who grow sunflowers. The only time that neighbours seem to assemble is when making silage, and several giant trailers are needed to follow the harvester.

My next door neighbour made silage from his Maize this year, which was immediately sold to someone else; leading me to suspect that his few remaining Cows will soon go.

Life is certainly quieter for local farmers, but no doubt the money still rolls-in from Brussels and its 'single farm payment'. However, so much has been lost in human terms. The camaraderie of times past has gone, the gastronomic competitiveness at harvest banquets has all but disappeared; and even the traditional cuisine of those peasant farmer's wives has been replaced by packaged Italian fast foods. Not one of my pukka farming neighbours now has Hens in the yard.

Having said all that, it's still a lovely place to live. The genuine natives of the area are still some of the most charming and generous that I've encountered, and, frankly, I still consider myself highly privileged to have been able to live here.