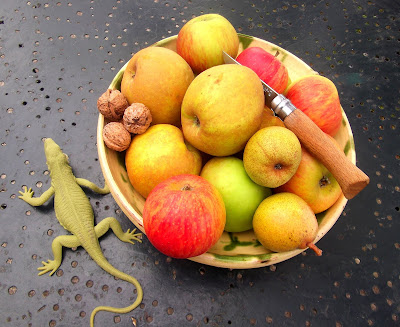 Our fruit season is almost over. There are still Figs and Quinces, but there would be, wouldn't there!

Time to reflect on quality. The Conference Pears were superb, but we had very few. The Reinette Apples were abundant, but they're no comparison to a Cox. The Jonagolds were both good and productive, but they are HUGE.

Without question our best eating Apple (I know they're known for cooking) was the Bramley. The red one in the foreground of the photo, above, is a Bramley. They are crisp, very tasty, and sweetish; what more could one want.

I have other trees which should start to produce next year (Melrose and Gala) so it remains to be seen if they can compare to the Bramley; somehow I doubt it.