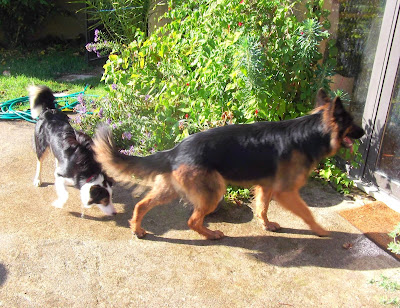 I can see jealousy ahead. Marley has a rival; the beautiful 'Ami or Amie'.

She's the new gal on the block, and has struck-up a really good relationship with Billy. Other than his own mother (who he probably doesn't remember) this is the first female dog with whom he's made friends.

She comes into the house, wanders around a bit, then plays with Billy outside for a while before returning the couple of hundred metres or so to her own new home (the Gypsy caravan).

She's a big, dark, heavy, impressive, dog, with a beautiful nature; and like Marley has made herself very much at home here. I like that about dogs, they are trusting and kind natured. The children like her too. 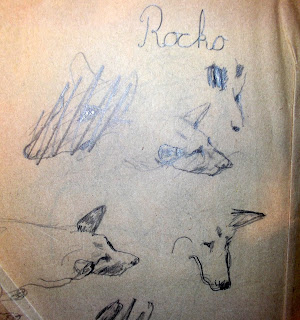 The majority of our friendliest local dogs have been German Shepherds. Many years ago one named Rocko would turn-up in the morning, spend the whole day with us, then return to his home (next door) in the late afternoon. His owners never said a word. Above are some of my then 10 year old son Kimbo's drawing of him.