It's worth looking closely at the photo above. This tiny kitchen is as basic as one could imagine, there is paint peeling from the walls, and the 'furniture' has been cobbled together in a rather haphazard fashion; including a rather spectacular French antique walnut armoire. Mr and Mrs Ikea would have a bloody fit.

The lady on the left, holding a glass of red wine (the owner of the kitchen), is of course Elizabeth David; one of the most influential post war cookery writers. The kitchen was in her Chelsea house.

I have quite a large collection of cookery books; mostly of the type that one can read in the way one might read a good novel. My mother had only a very few. Her favourite (most often consulted) was a book that came with her new gas cooker in about 1950. It became her cookery bible.

The Radiation New World Cookery Book was issued by 'New World' cookers, and was designed for use with their 'Regulo Gas Cookers'. It was first published in 1927, but my mother had a much later edition. It's a wonderfully old fashioned ENGLISH cookery book, containing all sorts of recipes for dishes that are now rarely eaten.

Her other favourites which she bought more out of interest than practicality were Elizabeth David's 'Mediterranean Food' and 'French Country Cooking'; both books that changed the whole concept of eating in dull post-war Britain. 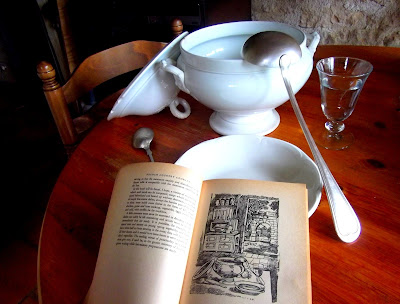 I can't say that my mother used David's recipes that much, but she certainly adopted some of the attitude; and we always ate very well. When abroad she would search out certain ingredients that David had mentioned in her books. I remember well her returning from Greece with a large (5 litre) wonderfully decorated can of very large green Olives in brine. I think her purchase was a result of reading David's description of Olives as being "As old as the taste of water itself". Olives were still hard to find in the UK.

After we were married, my mother gave Lady M a copy of the Radiation Cookery Book, and wrote a small dedication upside-down on the back page; she'd opened the book the wrong way round. Lady M still uses the book; mostly for cake making. It's not a book I'd really recommend.

Par contre, I'd recommend every single book written by Ms David; especially her wonderful non-recipe book 'An Omelette and a glass of wine'.