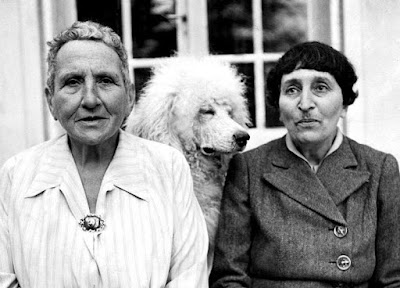 The only two writers who have had me pulling out my hair, have been Gertrude Stein and James Joyce. Maybe I should also add Virginia Woolf as a close runner-up.

I've attempted to read both Stein and Joyce on several occasions, and failed. I have, however, forced myself to finish reading various Woolf novels; under duress.

I can accept 'Stream of Consciousness' in painting, but not in writing. It confuses me.

Stein and Toklas (above) were an odd couple. An essential part of the early 20th Century Paris art scene. They knew, and hosted parties for, just about everyone of importance. Stein was also a great collector of paintings.

On her death Stein left most of her hugely valuable art collection to her 'wife' Toklas. Stein's family were not happy, and during her absence, entered her home and took everything away, leaving Toklas almost penniless. I still don't understand how this was possible; it has never been explained.

It is interesting to note that it was Gertrude Stein who coined the word 'Gay' for homosexuality. I think she would have been amused by its world-wide adoption.