Sikhism, Amritsar, and the Golden temple.

Sikhism, along with Buddhism, has always seemed like a very sensible and acceptable religion, in a world where so many other beliefs cause nothing but mayhem.

I'm not about to start wearing a turban, but I can readily appreciate their religion's philosophy. 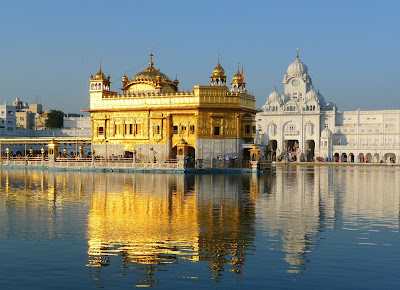 The Sikh God is described as Shapeless, Timeless, and Invisible; I can go along with that. Their philosophy includes Selfless Service, Moral Order, Justice for all, Righteousness, and Forgiveness. Sikhism is also totally non-sexist; I can go along with all of that too.

The amazing Golden Temple at Amritsar welcomes all people of all nationalities and religions; it does not discriminate. It also feeds all visitors (who require it) totally free of charge. 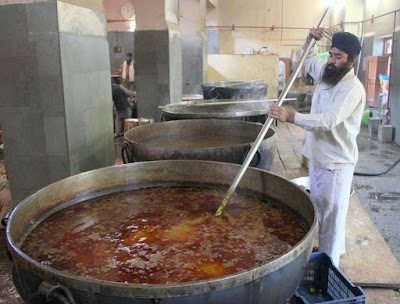 Can you imagine visiting an almost empty British Cathedral, and being given a free meal? Some bloody hope! At The Golden Temple they welcome on average 100,000 visitors every day, and serve free food to about 50,000. A remarkable feat, where all the preparation and service is performed by volunteers.

It really isn't surprising that the uber-wealthy Church of England is on its last legs. Where is THEIR charity? Something tells me it stays in the vaults of  Coutts & Co.

Yes, I could adopt Sikhism, but perhaps it would be best to emulate their ways, rather than begin to wear a Turban.