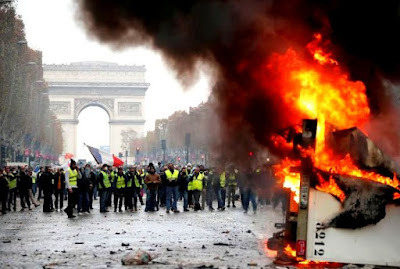 We are used to riots here in France. The French don't muck about when it comes to telling their political leaders what they think; and Macron has been told!

It must be said that the CRS don't muck about either when faced with rioting mobs. A poor innocent woman was accidently killed, recently, by a tear gas canister as she closed the shutters from inside her Marseilles apartment. I believe there have been four deaths in all.

I don't approve of wanton destruction and violence, but I have to agree with the concerns of the demonstrators.

The main problem with politicians ignoring their citizens, is that it gives rise to extremism. Marine Le Pen must be rubbing her hands with glee.