How just one ex-pat can cause so much upset. 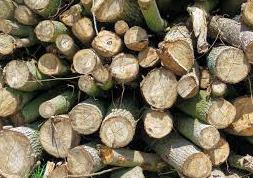 I can tell this story because the person involved is now deceased. The man in question told me the details himself, and seemed to think he was totally in the right, and deserved support. See what you think.

As ex-pats, our reputations can be severely damaged by the bad behaviour of one of our own nationality. If a Brit, Dutchman, or even an Algerian (for example) is involved in some theft or skullduggery, it can easily rub-off on all of his or her fellow nationals. All become tarred with the same brush.

The story is this. Hereabouts, when farmers fell trees for either heating or timber, they usually stack it by the side of the road, as near to its source as possible. It is accepted that up to a depth of a couple of metres, one can leave felled wood temporarily by the roadside until collected.

The elderly man involved in this tale found a pile of metre-long Oak logs neatly stacked on the edge of 'HIS LAND', and was furious that no-one had asked his 'permission'. He decided to treat the wood as a 'gift', and moved the entire pile to his barn.

It wasn't long before the woman whose wood it was, noticed that it was missing, and informed the police.

The police visited the man (an elderly Brit' retiree), and he admitted that he'd removed the wood 'to the safety and shelter of his barn'. He made some childish excuse about keeping it dry for the lady, but no-one believed him. In fact he was just another common tea-leaf; there are plenty about.

They 'cautioned' him, and he immediately returned the wood to its roadside location. He also visited the woman, whose wood it was, and as a half-hearted apology, offered her a bottle of Champagne; as if he thought that this would heal wounds!  Of course it didn't.

As with any local dishonesty, it didn't take long for the story to spread around the area, and the stupid man later spent his time trying to summon support by telling people that he'd been in the right (he even tried it on me; the idiot).

All thieving is crime, and as an ex-pat he should have known that his own reputation as 'a light fingered Brit' could easily have been heaped upon others of his nationality ("They're all a bunch of crooks" etc). His reputation as a thief never left him, and he sold-up. He found no support whatsoever with fellow Brits, and no-one was sad to see him go.