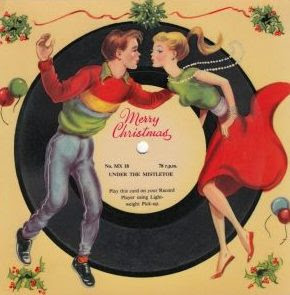 I like Christmas. Since having grandsons, it has reinvented itself to become as important again as it was when I was small. It's just a pity that the boys are all so spread around the globe. Thank goodness for Skype. Yes, Santa now visits by Skype!

Back in the 1960's we used to spend our Christmases in a small cottage on the Welsh/English border. If anything the cottage was smaller than our house here; two up, two down. However, my mother would always put on her annual show of excess, and everyone really loved it.

For Christmas Day there would often be the four of us, plus an aunt and uncle, plus another aunt and uncle with their three boys. The poor little house was filled to bursting. 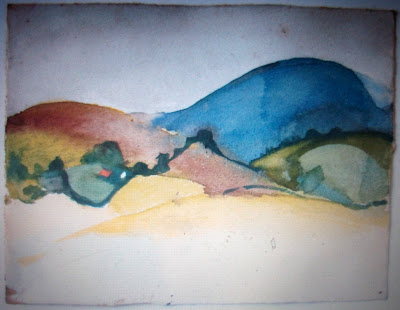 The location of the cottage was spectacular. It was set on the very top of the first hill that looked out from England over to the rolling hills of North Wales to the West. When it snowed the view was like something out of a Disney film; with the red of the rising and setting sun, it would become one huge pink extravaganza. Above is the view, without the snow; watercolour by Lady Magnon.

There was always a huge tree, a fire in the hearth (coal), and more than enough uber-rich food. We all had far too many presents (nothing extravagant), and the supply of drink never ran out. I don't think we had a TV there.

The cottage was situated on Offa's Dyke, and the long peaceful walks it offered were wonderful, usually with some friendly local farm dog in tow

They were probably some of my best ever Christmases. Location, family, and good food... what more could you ask for.

I just hope that your own early Christmases created such memories.