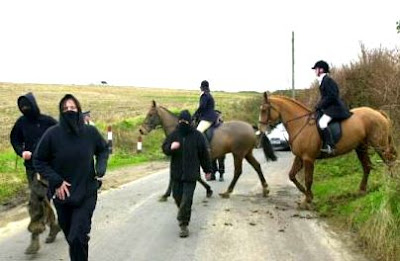 Since 2004, when hunts were banned from hunting Foxes (they now simply follow scent trails), the hunt saboteurs are at a bit of a loss about what to demonstrate against.

Their disruption of Boxing Day hunts has now become simply 'anti-toff', and another excuse to pull their anarchist masks over their faces, wave a few placards, and cause general mayhem.

So may I suggest that they focus their attention elsewhere, where real slaughter of cute wildlife is on a horrendous scale. CATS.

The Royal Society for the Protection of Birds estimates that around 275 MILLION CREATURES are killed by cats each year; 55 Million of which are birds. Our own late cat, Freddie, did his best to reduce the numbers of mice here in France (with my approval).

So, why are the little darlings not demonstrating outside No 6 Rodent Ave, or No 10 Downing St, where Tiddles or Larry are doing their worst? Could it be that the saboteurs themselves own some of these outrageously murderous cats?

Obviously the UK's cat population doesn't dress-up in pink-coat finery, and ride around looking for victims on horseback, so it might be difficult for the demonstrators to know quite where to aim their pointed shoulder-chips; instead, they might like to lobby parliament for a bill insisting that all cats wear extremely noisy warning bells on their collars.

Instead of trying to harm horses, these militant animal lovers might actually feel more virtuous by saving some rodents or garden birds.

p.s. I should add that, personally, I am not anti hounds, horses, well-dressed horsemen, OR even our population of delightfully murderous cats.