It just HAD to happen! 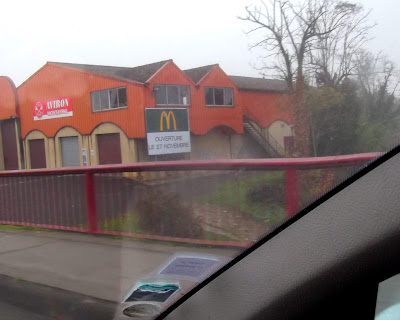 You may have to enlarge the picture to see, but a sign on the wall of our local Rowing Club claimed that on November 27th, a new McDonald's was to open in my nearby small town. I have no idea where it will be situated; it didn't say.

Now, I have nothing against McDonald's as such (I've never actually eaten there), but the massive globalisation of any fast-food eaterie worries me.

An area can very soon lose its identity if it ignores either its vernacular architecture, or its local gastronomy. When people order a McCoffee and McCroissant, rather than preparing the same at home, then you have to start to worry.

OK, have a McBurger as an emergency, but not all the time (as many do), and not to the detriment of those dishes your Grandmother used to make.

Long live home made, slow cooked, grub. I shall NOT be visiting Mr McDonald!

p.s. I've just been past the sign again, and now it says 'OUVERT'. I've even spotted where the 'restaurant' is located!