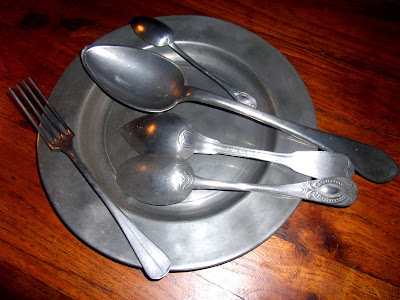 When I first arrived to live in France, all those 42 years ago, I was surprised to see how much old pewter turned up at markets and boot sales, at knock-down prices.

Knowing that such things were seen as 'valuable antiques' back in England, I decided to start a collection.

I bought lots of plates, forks, and spoons, and ended up with quite a large collection, which I still have. I don't look at them too often these days, in fact they are mostly packed away at the back of a cupboard.

When taking these few bits (above) out for a photo I was amazed by how flexible some of them are, suggesting that they possibly have a high Lead content; or, indeed, are 100% Lead. The small spoon (top) could almost be a prop for Uri Geller; you only have to look at it, and it bends.

Maybe the reason why people, in the past, died at a much younger age was because they stirred too much lead into their porridge!

N.B. I looked up my spoons on the net, where they were described as '19th Century French Antique Porridge Spoons', but I suspect that some wide-boy antique dealer was 'avin a larf!