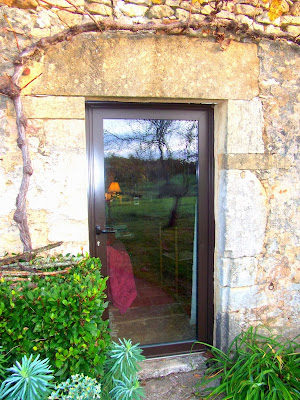 It's quite difficult to tell the age of our local buildings, other than by the pitch of the roof or the cut of the stone openings.

Because building techniques have remained much the same for centuries, and old cut stones being often recycled, one could easily make mistakes.

When I bought this little house, about 38 years ago (we were living about 300 metres away at the time), I asked a friend to look at it and give an idea of how old it was. He said there was only one way to determine the age of domestic architecture, and that was by measuring the front door.

We measured the height (200 cms), we measured the width (95cms), and we also measured the depth of the wall (60cms). His conclusion, at the time, was between 250 and 300 years old; leaning towards the latter.

Having now totted-up the passage of time plus his initial estimation, I am pretty certain that my little cottage is at least 300 years old; built around the early 1700's.

This means that the first family to have lived here would have done so under the reign of the much loved Louis XV (1710-1774). As Louis became king aged 5, the cottage was almost certainly built in the days of a pre-pubescent king.