A Tale of Trompette Gathering. 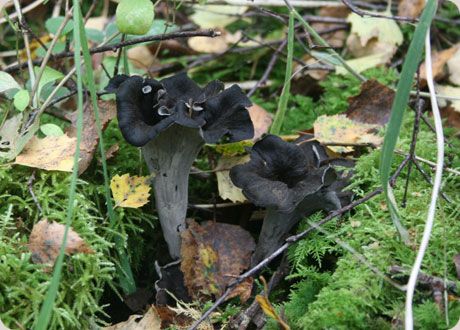 This picture is from a couple of years back, but I'm using it again simply to illustrate this story.....

Mushrooms, mushroom-hunting, and mushroom-selling are a big part of local life here. If one called it an obsession, it would easily merit the name.

Many years ago, at exactly this time of year, a friend asked if there were any 'trompettes', (Trompettes des Mort, above) near my home; I replied yes. She said she would love to pop-over and pick a few.

I took her to my best spot, and we started picking. I topped-up her baskets with my own gatherings, and noticed that she was beginning to have a VERY large haul.

We continued to pick until I just had to ask if she hadn't got enough. She replied that she wanted as many as she could find.

'What on earth are you going to do with them all?' I asked.

'Sell them!' she replied.

'WHAT; I'm here picking MY OWN mushrooms, so that YOU can go and sell them', I said in amazement.

She didn't reply, and we returned home (in silence) with about 8 kilos of mushrooms, which I presume she then went on to sell for a king's ransom (which I would normally have done myself).

Whenever 'trompette' season comes around, I always think of her, and this story. Not earth shattering, I know, but a cautionary tale car mème. She was never invited again.