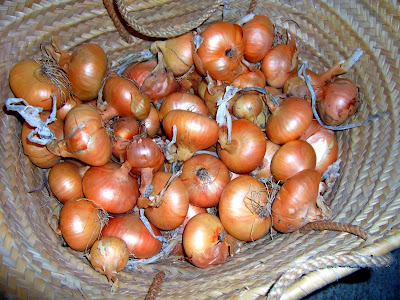 We've all heard about the rise in price of onions in India; it has, apparently, quadrupled over the last month. A disaster both domestically and politically.

My own small home-grown stock, above, amounts to about 15 kilos, but is not an essential part of my diet. However in India the price, and availability, of onions is as important as eating itself.

Onions seem to be used in most Indian savoury recipes, but they are also an important food-stuff in their own right. I had always previously understood that 'Rice and Dahl' was the staple food of India's 'less-fortunate', but I'm now told that 'Rice and Onions' is far more common.

So, what has caused this problem. As with Ireland's famous 1850's 'potato famine', the problem is not that there aren't any onions (or potatoes in Ireland's case), it's that greedy merchants have found more lucrative markets, and are taking advantage of increased profits elsewhere.

In Ireland there was plenty of grain and other foods to replace the infamous blighted potato crop, and feed the nation; but the rich Irish and British landowners/merchants preferred to export to both mainland Europe and Britain itself, where they commanded much higher prices.

In India's case, I believe that the Indian 'Onion merchants' are exporting to the Middle East, where money is probably never in short supply.

p.s. I've just heard on the radio that India now has a chronic sugar shortage (which in their case is probably not such a bad thing). Let's just hope that rice doesn't follow the same disastrous course.