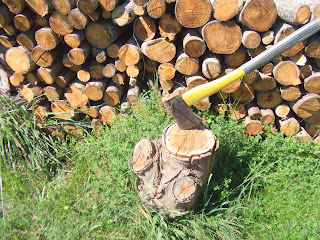 I've not previously mentioned the name of my tiny village, simply for reasons of  privacy (mine, not theirs).

When my previous blog 'Je t'adore, twenty four' was up and running, I received a surprise visit from two English bicycle-riding blog tourists. They had worked out exactly where I lived from my descriptions, and even said that they would have recognised Haddock's (my veg' garden) anywhere! They were a very pleasant couple, but, even so, it was slightly dis-quietening to know that I could be so easily traced (think tax-man, angry husbands, my wine merchant, etc).

Anyway; so what's the name of my village?

Well, it's called 'Lumberjack'. At least that's what Mr Spell-check would have me call it; given half a chance.