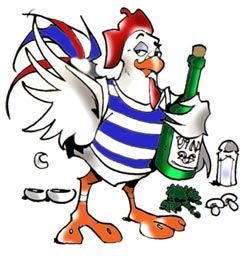 The last time we kept chickens they were truly FREE RANGE. They congregated around the central courtyard of our old farmhouse, and at night simply found themselves somewhere to sleep in our huge hay-filled barn; occasionally appearing with a dozen or so chicks in tow. Otherwise they just lived in total freedom; more often than not using my veg' patch as a dining room.
Occasionally one or two would be invited to sacrifice themselves at the altar of gastronomy, and they needed to be caught.... not easy when they've developed Olympic standard leg muscles. So I devised a cunning plan.

I would soak stale bread in wine (sometimes with some 'eau de vie' added for ooomph), feed it to the hens, then wait a few mins before they were all staggering around like Glaswegians. It was then very easy to pick the best of the younger crop, prior to dispatch.

Plucking: In England I've seen people make really hard work of the whole plucking process. Over here things are much simpler. We boil up a large 'bucket' of water, then dip the entire chicken into the boiling water (for a few seconds). The feathers then almost fall out by themselves, leaving a beautiful cleanly prepared bird.... Forget dry plucking and the air filled with tiny feathers; that's for mugs!

In our house it was always the children's job to collect eggs. It is partly for this reason that we are about to keep hens again. I cannot imagine our grandchildren growing up without the pleasure of going out each morning to collect eggs for breakfast. I did it when I was small, my own children did it when they were small, and I want my grandsons to have the same wonderful experience now.

Get yerself over here Grandma; now suck that egg!
Posted by Cro Magnon at 06:52