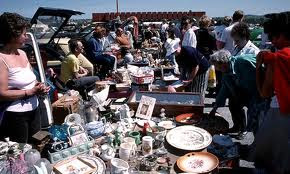 I've just been told this story by the son of an old friend.

They were moving to a smaller house so Mrs G instructed Mr G (my old friend) to get rid of as much stuff as possible. Being an avid Boot Sale cruiser, he decided to set up a stall himself.

The day arrived and he enlisted the help of his daughter, who was determined that everything should go; regardless of price.

Half way through the morning Mr G decided to have a wander around the other stalls, and left his daughter in charge. In his absence she began selling stuff at knock-down prices, including a rather nice single 'old' candle stick.

Some while later Mr G returned to the stall brandishing another candle stick that was exactly the same as the one on his own stall. He proudly informed his daughter that as a pair they would sell really well, and for considerably more money than twice the price of the single stick.

When he asked where the other stick was, he was a little disturbed to hear that it had already been sold. It then dawned on him that the one he had just bought was in fact his own self-same stick; but marked up at ten times the price. Oh dear!