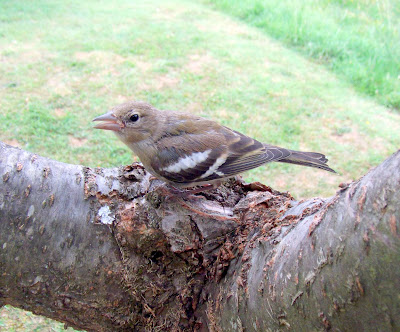 This female Chaffinch is the latest victim of our new plate-glass doors.

She was a bit groggy for a while, but eventually took to the skies again, and is no-doubt now telling all her chums about her adventure.

Had she been human, she would probably be spending the next few months in hospital, but being a mere birdie she just rested up a while, received a few kind words, then was gone.

Another 2 bizarre bird stories: A couple of days back a screaming Greater Spotted Woodpecker shot into the sitting room and was flying around like a bird possessed. I eventually had to catch it with one of the children's butterfly nets before releasing it outside. I think our Freddie (the cat) was behind its panic, I noticed that the poor thing had a drop of blood on its chest. Oh dear, I hope it's all right.

Then yesterday we were all up at the barn when a fledgling baby Redstart literally flew into my open hands. We all played with him for a while, then his mum came to fetch him home. All together now.... Ahhhhhh.