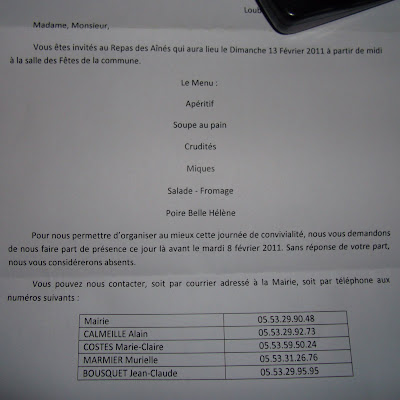 For the second year running, our Mayor has sent us an invitation to the 'Old Folks' luncheon (Repas des Ainés), to be offered by the commune on Sunday 13th.

OK, I'll never see 45 again; but I don't consider myself ready for the scrapheap.

However...... I notice on the menu, that we are to be served 'Mique'; something I would never turn down. I'm sure that Mique was introduced to the area by the English during The 100 Years War; it simply doesn't have a French feel about it.

Mique itself is a giant dumpling. It uses duck fat instead of suet, and is served with boiled salted pork (petit salé) and a variety of root vegetables. This is rib-sticking winter food; not for those on fad diets.

We shall (reluctantly) accept the Mayor's kind invitation, and I shall, hopefully, post some photos some time later.