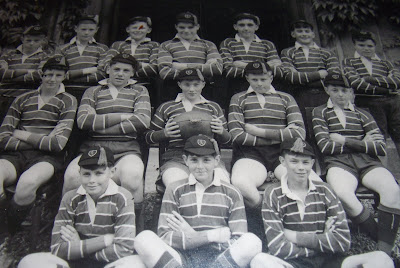 It's almost Rugby season again; so for a few weeks my saturday afternoons will be spent tearing out what hair I have left, in frustration.

I am fortunate to have played both School and Club Rugby. Here I am (above) in 1960, aged about 14, in my prep' school team. (I'm the one with the knobbly-knees; far left middle row. I've still got the tassled hat) 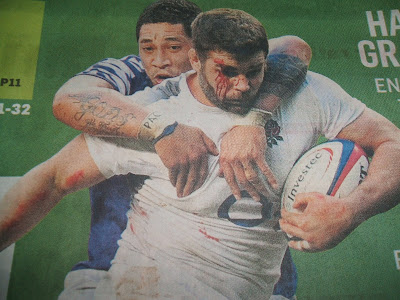 With School Rugby you knew pretty much what your opposition would be; all of similar age, and all similar size and weight. Club Rugby was an altogether different matter. Growling 25 stone, 7 ft, apes, would tackle not just to bring you down, but to inflict as much pain and damage as possible in the process. After most games (in my predictably short Club playing career) I looked much like the guy above. I was very lucky to escape without serious damage.

Of course, that's all part of the game, and where Rugby has been tampered with by the oh-so-cautious-Health-n-Safety brigade, it's much less interesting. In the north of England they play a girlie version with just 13 players on each side (instead of the proper 15), and the players wear nice comfy (probably home-knitted) shoulder pads.

Elsewhere in the world, I believe that an even girlier version is played; the rules have been completely altered so that no skill is required, and every conceivable comfy safety device is worn, including 'helmets' of all things! (ahem)

The annual 6 Nations Rugby Competition is just about to kick-off. I'm a supporter of either England, Wales, or France. So, as long as neither Scotland, Ireland, or Italy (yawn) win; I'm happy.