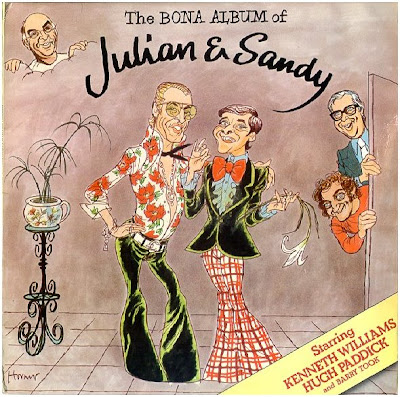 I've always loved the Julian and Sandy sketches from 'Round the Horne'. But I've often wondered how many people miss the point of (or even understand the reason for) the strange 'Polari' language that they used.

I worked, and lived, in London during the mid-to-late 1960's, when Polari first made its 'outed' appearance.

Polari was the secret language of the Gay Community. At that time homosexuality was illegal in Britain (until 1967), so in order to keep conversations private, they developed a coded language. Much of this, thanks to Julian and Sandy, has now become incorporated into our everyday language; here are just a few well-known examples.

By the late 60's/early 70's Julian and Sandy had become a very popular radio double-act, and Polari became public property; often 'amusingly' used by non-gays. Eventually the need for a gay community secret language declined, and Polari fell into disuse.

So the next time you call something 'a bit naff', or say 'I'm sure that's a bloke in drag'; remember, you're speaking Polari.

Never been to Bona Books, or the Bona Ballet? Visit You tube. Look under Round the Horne.. Julian and Sandy.
Posted by Cro Magnon at 05:32