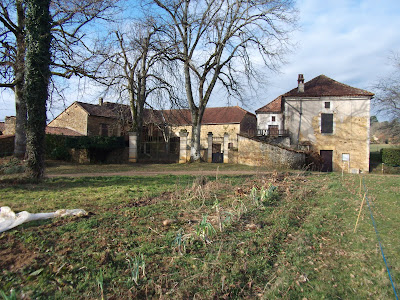 I may occasionally give the impression that we are completely isolated; we're not. Apart from our few immediate neighbours (who are just a few hundred metres away), there are a handful of other houses nearby. From in front of the cottage we can see a couple of them in the distance; particularly the rear of the one above.

This is the farmhouse that I bought in 1972 (aged 25) when I first moved to France. The outbuildings were all magnificent; but the house itself had been rather spoilt in the 50's/60's, and after a few years it began to annoy. The distant little white blob (about 300 metres away), halfway up the right side of the house, is the (much nicer) tiny cottage where we live now. We ain't moved far; just downsized! (if enlarged you might just see our poolside palm tree, outside my reddish studio) 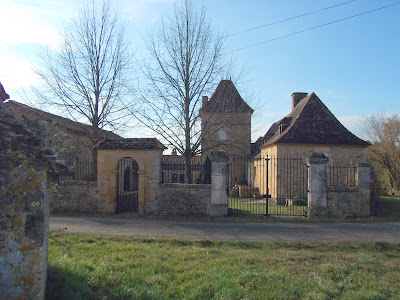 About 400 metres along the track from our old place, is this beautiful house which, currently, is a little neglected. French inheritance laws are complicated, and one can easily end up with countless distant family members all owning part of a property which no-one wants to repair single-handedly. The little roofed arched entrance gate is really beautiful; the sorry state of some of the other bits, is NOT.
Sadly both homes are now occupied for only a few weeks of each year. My friend Claude, who's farm is situated equidistant between the two, really looks forward to summer, when their shutters are thrown open, and the sound of human voices can, temporarily, be heard once again.

With so many second-homes being closed up for 11 months of each year, this is now an all-too-common problem.