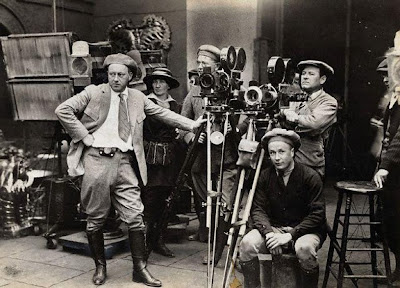 Less than two weeks to go before Christmas, and I've got this really great idea for a movie.

Imagine the scene. It's late December, and a handsome young cowboy (played by Tom Stephenson) arrives at a desolate prairie farmstead. His eyes fall on a shapened axe; he's hungry and thirsty and offers to split logs in exchange for a 'mess of beans', and a dip into the water butt with one of those tin-can-thingies-nailed-onto-the-end-of-a-stick.
The lady of the house (played by Amy Saia) is a beautiful, Winchester-totin' widow, sporting a suprisingly fashionable low-cut barmaid style dress; she coyly agrees to the stranger's offer.
When he's finished the logs, the handsome young cowboy (still played by Tom Stephenson) busies himself by fixing the roof, just as the first few (exceptionally rare) desert snowflakes begin to fall.
Carol singers appear from nowhere (played by Carole, Molly, and Linda), and slowly the camera pans to the tumble-down wooden barn where a cleverly lit nativity scene is in full swing (Mary is played by Willow, the Archangel Gabriel by Jacqueline, a scruffy shepherd by Cro, and the 3 wise women T Clear, Little Stalky, and Simone).
The snow deepens and a distant lone angel (Maiden Luxe) hangs in a yellowed sky sipping a cocktail, and singing 'Somewhere over the rainbow'.
The film ends with the lonesome stranger (Tom Stephenson again) marrying the lonesome widow. In true Hillbilly style, they find a huge deposit of oil on their land, and become fabulously wealthy. They move to a compact but adorable town in the UK's west country, where the now 'not-so-lonesome-cowboy' (yes, him) starts an axe manufacturing business in honour of how he met his wife.
So, wadda'ya think! Good eh?
Posted by Cro Magnon at 05:35