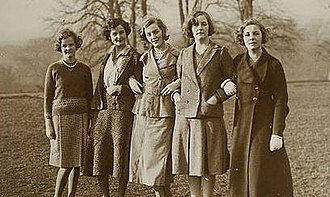 If you have lots of daughters, just think yourself lucky that you didn't have this bunch.
The Mitford sisters were born into an aristocratic family, their father being the 2nd Baron Redesdale. I'm not sure what influences fashioned their lives, but they certainly didn't behave as expected from their ilk.
Diana was a Fascist. She was wife No 2 of the infamous Oswald Mosley.
Unity was famous for being a great supporter and friend of Hitler.
Nancy was a novelist. I do remember reading 'Noblesse Oblige' when I was at school.
Deborah was always known as The Duchess.
Pamela was 'An Unobtrusive Poultry Connoisseur'. It was claimed that after her divorce from Derek Jackson she became a 'shirt-n-tie-job'.
And Jessica was a Communist and 'singer'. Here is Jessica singing the Beatles song Maxwell's Silver Hammer. A fine rendition.
In the above photo Jessica is the one on the extreme left, and Deborah is the one missing.
Posted by Cro Magnon at 05:34