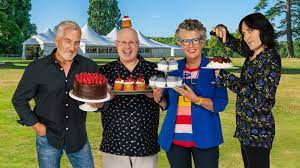 Now I see that we have a new Great British Furniture making show, and one can but wonder where it will end.

Some while ago I did suggest a 'Celebrity Bomb Disposal' show which I'm sure would have attracted huge audiences. Just imagine the tension as Diane Abbott or Ms Markle defuse huge bombs with shaking hands and sweaty brows. At home the TV audience would be heard shouting "Cut the red one" or "Cut the blue one" depending on how soon they wish to see them blown to pieces. Audience numbers would be through the roof.