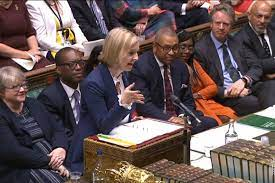 Today (yesterday) is a pivotal day in UK politics. It represents the transition from Johnson to Truss, and today is her first real test as new Prime Minister.

Every Wednesday at noon the leader of the opposition (and a few others) has about 30 minutes to ask questions directly to the PM. Known as PMQ's, it is the weekly sparring between Conservatism and Marxism, and is the showcase for the policies of both sides.

It must be said that Liz Truss is slightly lacklustre; she has little of Boris's forceful character, wit, or even knowledge. She is a politician above all and will answer her questioning logically, but without much humour. On the opposite bench Sir Kier Starmer is bland, uninspiring, and totally out of touch with what makes UK Plc tick. He isn't a difficult opponent.

I watched with great interest. We all knew that it was at this moment when Truss needed to set-out her policy for the next year or two. It was also at this very moment when her, and the Conservative party's, future would be decided. She needed to be honest, tough, and inspiring.

She was OK; that's as far as I'd go. She falters in her delivery and doesn't seem to be able think far enough ahead. As is usual for every Tory PM, she did try to teach the opposition about the folly of 'Tax and Spend', but they never listen. Every Labour government has ended a term in office with very high unemployment and the country's finances in an awful mess; you'd think they'd try to learn.

Liz needs to be cautious. She has sacked all Rishi's supporters from their previously held positions and could well be building an enemy camp on the back benches. Her first speech on Tuesday afternoon outside No 10 was uninspiring but to the point. That morning Boris had made his farewell speech from the same podium with entertainment humour and gusto; a very different performance to that of Truss. She desperately needs lessons in public speaking!

Liz was president of the Oxford University Lib-Dem club whilst at Merton, but we'll try to forget about that! I couldn't help thinking that she has replaced a formidable leader and will need to make a lot more effort. If her own party treated Boris as they did, I can only imagine what they'll do with Truss if she shows weakness.