I spent this past week in permanent pain. It started with a stiff neck and became a really nasty migraine. The only thing I could think of was PILLS, and more pills. I couldn't move my head, and sleeping was impossible.
I had taken the last of my Super-Dooper-Neurofen tabs, and was desperate for more, so I went at once to Boots (a large UK pharmacy chain). 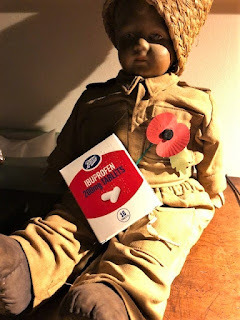 I asked the nice lady for a big pack of her finest Mega-Fast-Acting-Neurofen and was quoted a price of about £15 for a pack of 32. When I gasped with shock/horror she advised me that instead I should buy their own label Ibuprofen tabs which were on offer at 45p for 16. If I bought two packs for less than £1, she assured me that it would produce EXACTLY the same result as having bought one large pack of Neurofen. She said they contained EXACTLY the same thing. She also advised me NEVER to buy such branded products.
It's very refreshing to find a salesperson who was so honest, and I told her how much I appreciated her advice. If you are a shareholder in Neurofen I make no apologies; I shall never buy them again.
So, I had saved myself £14. I then needed to do a small amount of shopping at M & S which came to just under £10 which I considered to have been FREE, with another £4 remaining in my pocket for later.
The pain has now subsided thank goodness. I have no idea what it was, or what brought it on. I have no idea either if the pain killers helped, but at least there was some placebo effect.
N.B. Boots Ibuprofen tabs (above) modelled by Alphonse!
Posted by Cro Magnon at 05:45