When we received our current Phone Book, we were told that it would be the last; the end of an era.
From now on, if you don't know someone personally, there is little hope of phoning them, or even finding their address; unless of course they are advertising themselves on the side of a bus. 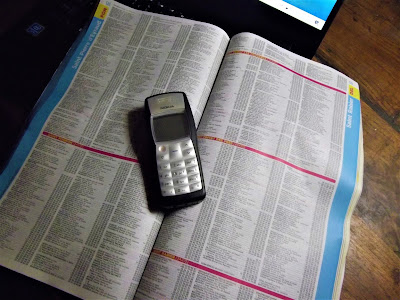 I'm of an age when (if we were lucky) we had a large black telephone, with a round finger-hole dial, on a table in the hall (the hall table). The 'phone was in its own little sanctuary, and was used very sparingly; mostly for incoming calls. Such 'phones were rarely found in the drawing room, or elsewhere. There was something very comforting about its positioning; the radio was in the drawing room (maybe with a TV), and the 'phone was in the hall. That's how it was; almost by government decree.
Another antique is my old Nokia. Even if I could find someone's mobile number, my old (and only) mobile could no longer call it. I haven't used it for decades, and it's hardly worth re-activating. I don't own a smartphone.
I tend to keep all this old stuff, as I do all my old laptops etc. However, I'm tempted to chuck out all my video tapes that are stored in a UK loft. They are worthless and I no longer have a video player. I also have boxes filled with cassette tapes; which are also destined for the dustbin.
How quickly things change.
Posted by Cro Magnon at 04:12